The King is certainly a very unique opponent. The first point which is important to note about him is that he sends no persistent attacks to your estate. The only attacks you will ever experience by The King are Sieges themselves, if you do at all. This makes The King a good opponent if you want to spend time building up your castle and not protecting yourself from persistent guerrilla warfare styled attacks. He keeps his important buildings very close to his Keep inside his own castle, so there is very little chance of being able to destroy any of these. His castle is generally built very quickly, although there is a large gap in the north-east wall where the Great Tower will eventually be placed.

The King mainly uses Swordsmen, Spearmen, Pikemen and Archers, although it takes him a very long time to assemble a sieging army, if he does actually does so at all. The vast majority of the time, The King does not send any sieges as he does not have the Spears available within his Armoury due to his castle design. 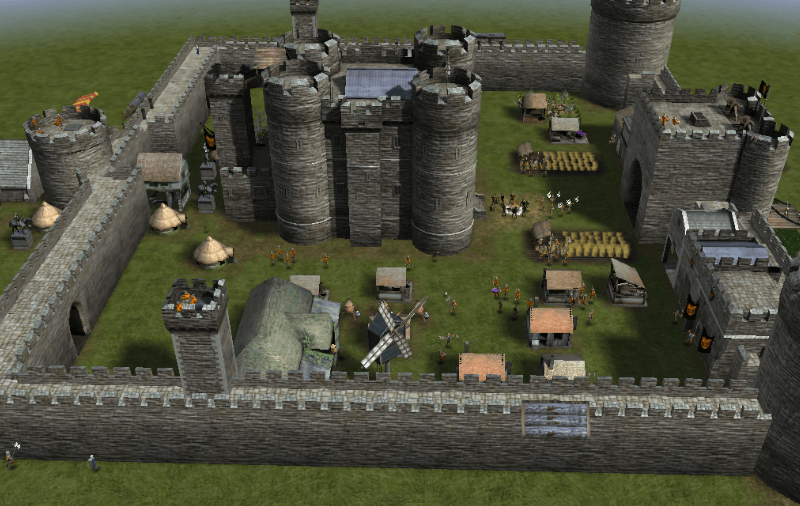 His first castle is the one which he most commonly builds. When it comes to attacking it, you should always use Trebuchets to destroy the towers first. Make sure they are protected by Cats, and keep Archers nearby in case some of his troops attempt to take out your Trebuchets. Once the towers are destroyed, create a breach in the wall and simply move in with your armoured units. I also recommend watching out for the patrolling troops and killing them off with Archers or Crossbowmen before you try to move into the castle to make things easier when you're inside.

In the case of his second castle, this is much larger and while it consumes much more stone, it is a much better castle and one of the best in the entire game. It uses a Large Gatehouse with moat, two Sally Ports and various large towers for additional protection. A lot of The King's castle buildings can actually fit directly inside and therefore makes it very tricky to damage his economy in any way. The best place to attack is definitely from the rear of this castle, if you can get around there.

If this is indeed an option, then you should attack the Sally Ports with as much force as possible until you break through. If you cannot, the only real option to attack the front is by using many Trebuchets heavily protected by Cats. Target the Great Towers first, then weaker spots in the wall such as where buildings are placed. Once you've done this, you're finally able to penetrate it, and get to his keep!

Tip: Like The Bishop, The King has a Church placed outside his Castle (usually near the Sally Ports at the rear) and will occasionally travel to the Church. If you don't wish to have to hassle of having to break through into his Castle, you can try to attack him whilst on his journey there.