The Bull is certainly an almost unique opponent. His army appears to consist entirely of Outlaws who repeatedly attack your castle in droves. They're easy enough to kill, but are irritating. For this reason, make sure that all your buildings are protected with an outer Stone wall, and especially secluded buildings away from the centre of your estate. Once that has been done, you will face no problem with The Bull trying to vandalise your industry.

The Bull seems to prefer guerrilla warfare to wear you down, and is much better at offensive combat than defensive. His defence in comparison being fairly poor, and he also takes a very long time to complete his castle - this could well be part of the problem, it leaves him vulnerable for a very long time if you can get to his castle with a strong force. The Bull only ever uses the exact same Castle layout as well, no matter which map he is placed on. So once you have mastered his castle, The Bull is no longer an issue.

When sieging your castle, The Bull sends a moderate force of Archers and Macemen. He attempts to use Catapults to destroy your walls and uses Laddermen on anything that might be left. He also uses a single battering ram on your gatehouse. Make sure you use Towers wherever possible to combat this, and place Archers in them so they can reach further. By targeting siege equipment first, you can also minimise any damage. 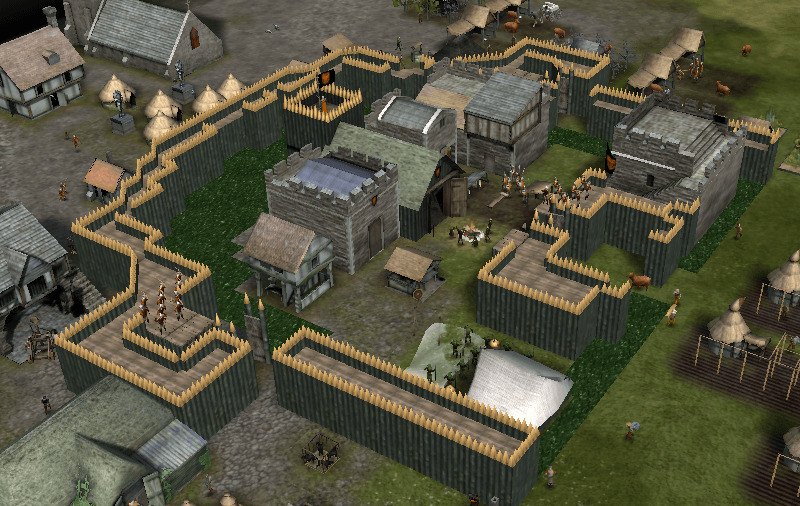 Let's take a look at his Castle: poorly constructed, his castle is built entirely out of Wooden walls. There are several groups of Crossbowmen on guard at various points throughout the wall, but these are very easily overwhelmed. Wooden walls have a shorter range than Stone walls, and Crossbowmen also have a shorter range than Archers, which gives an added bonus - they have a short range and can easily be killed off. The stairwells providing access to his walls are also outside of his castle with only a wooden gatehouse blocking access. You can easily smash this down with a group of melee troops such as Spearmen.

His moat is on the inside of his wall - a very interesting feature, but hardly effective at all; by the time any attacker has penetrated his wall there are no troops left to kill off any invaders. The moat then serves the purpose of slowing any invading force down while they dig it out, rather than blocking passage or serving any strategic purpose. It's also surprising that there is no frontier wall on his castle, which is another poor strategic decision.

I recommend using Catapults to destroy the wall where the Crossbowmen are stationed and moving in afterwards with your troops. Send in several waves of Archers while your troops dig the moat, who will attack anything on the other side that moves, and then if you actually get to the other side without The Bull dying, send your troops up to the Keep to finish him off. Victory!

Tip: Beware of smashing straight through the main gate of his castle as there are numerous man traps placed to kill off attacking troops, and you will be caught with a volley of fire from Crossbowmen.