In the Stronghold 1 and Stronghold Crusader map editors, it is possible to make land lower than the minimum height. This trick was discovered by Stronghold Knights, and is called the "Hades" trick. For certain terrain such as Beach and Sea, the land type needed will automatically be given, but for other land types a trick is needed in order to remedy the situation.

Hades is useful because this trick can be used for unusual placement tricks, such as floods. The Hades trick is not very deep, and is only slightly deeper than the minimum height in the map editor. When hearing about the "Hades" trick, the term "8 clicks" might be used. This means 8 clicks of the "lower terrain" tool on a piece of minimum height land in the editor. Placing tiles such as beach will take you to the correct level of land immediately. This is generally the most used terrain type for the trick because it's easier and contains unique properties. Sea does exactly the same as Beach - it will take you directly to the correct land height.

Another option is moat. This however, can only be placed on minimum height tiles and no other size. This effect can be seen below, where smap has been placed (minimum height) next to the moat (Hades height). In this particular case it is very useful because it looks like a bog and ifts in very well with the surroundings. 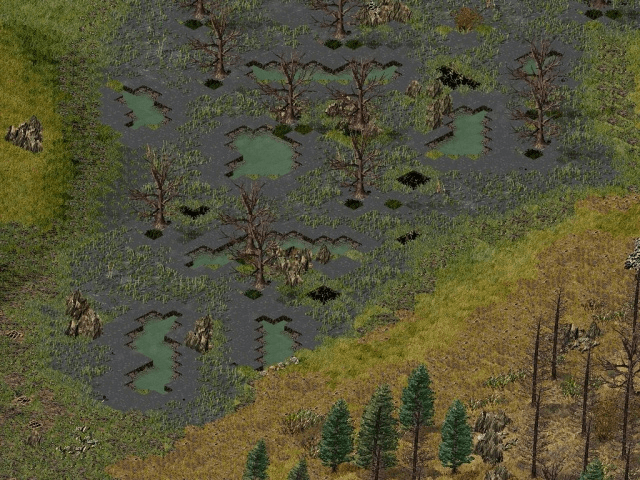 For the rivers, fords, foam and ripple effects, paint the tiles over minimum terrain. The terrain under where you paint is lowered by the 8 clicks. Although rocks and boulders can be placed on Hades land, they will always revert it and raise them back up to minimum height. Pitch ditches and killing pits can be accomplished by placing beach and then building over the top of it. To use Hades' grass, place beach and go over with stone. In this example I've gone over the edges in stone as well as you can better see Hades' grass. 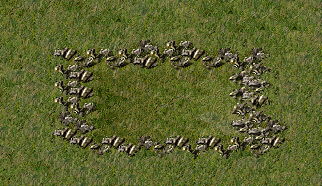 You can also make some dirt on Hades' height. To do this, place some sand, then place a building such as a gatehouse, and then use the "X" delete tool to destroy the building. The result will leave dirt terrain on your beach. 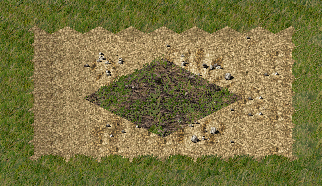 To place ruins, flowerbeds or buildings on Hades, pleace beach, and then place the buildings. This is very useful for ensuring that buildings appear on the same level as floods. In Stronghold Crusader you only get don't get Hades' grass, you only get the usual Crusader sand instead. It is possible to get Earth and stones instead though. First, place some beach, then go over it with Earth. Once you get the Crusader sand, go over that with Earth and stones, and then you have your result!

In Stronghold Crusader there are no land restrictions, and you can make use of this fact. Place some beach, and draw over with Iron to get Iron!