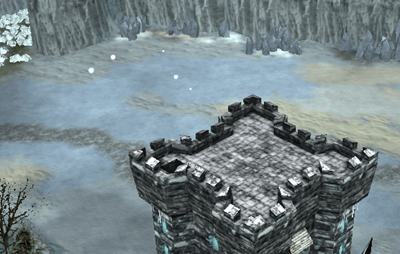 This will be your most challenging mission yet. You must get a strong economy up extremely quickly otherwise you will be slaughtered. At the beginning of the mission, you will notice that you have the choice of placing your stockpile next to either stone or iron to make getting one resource easier. This is a decision that will influence how well you do. For this reason, one resource will always be short during this mission. But it is better to be short of stone than iron as it's much easier sell iron and buy stone than the other way, so place your stockpile next to the iron. Then place a wood camp, iron mine, ox tether and then a dairy farm for food. Your defense is the least of your worries here because you will have no troops to protect them unless you get a good supply of iron. And unlike the previous missions, your supply of gold is much more limited. When you get more wood, build a second wood camp.

Now, you can focus on stone. Quickly build two stone quarries and ox tether to transport it to the stockpile. By this point, you should be needing more food, so place a couple of farms near the granary. Now your first shipment of stone should be arriving - so build another ox tether to transport some more. Quickly build a barracks, armoury and fletcher's workshop. If you are low on gold at this point, sell some iron - you don't quite need it yet. Buy some bows and then recruit all the archers you can - four witches are on their way. Without troops already there when they come you're as good as dead. If you don't have enough stone yet to build both a barracks and an armoury, just buy it. Now you need to start building up your economy - keep building fletcher's workshops and occasionally armourer's workshops and blacksmiths. To increase iron production, you can also build more iron mines - but don't forget about food as well!

You must build enough farms to keep your population fed. If you have enough food, start to increase the ration level which will mean you can start taxing your peasants to gain more gold. And make sure that you do place walls to stop invading forces from attacking. The first proper invasion will come from the end of your iron mines, so make sure that is fortified first. You don't need a gatehouse at that end - as you're not going out this mission. Place another wood camp and start to sell some of your wood - you don't need it as much now. You'll get another attack from the witches again soon, so make sure you have enough archers as this time it will be much stronger.

If you have enough gold, an ice mirror is an excellent way of slowing down enemy troops which you can place on your walls. Stone is also well spent on Lookout Towers; troops in them will fire a lot further, sometimes even out of range of the witches. Good money can be made from candles. Chandler's workshops are relatively cheap to build and produce a lot of candles which can sell for money - or, can be used in the church to boost popularity. You must not only strengthen one end of your estate though - invasions will come from both sides. An attack will come from the opposite direction, so if you aren't prepared for it, you will easily be overwhelmed, as you can see below if you do not place many troops there. 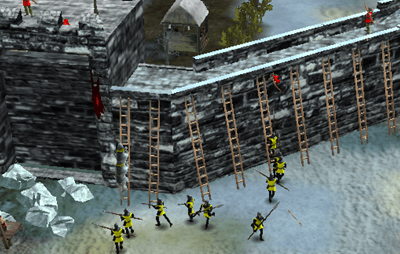 At this point, you can probably just buy troops and sell resources to get the gold you need to do so. You will need to at some point, because otherwise you will not be able to withstand the final invasion which comes from the direction of the first invasion. 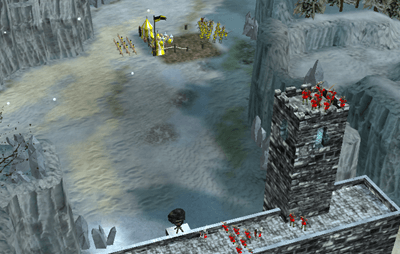 All you need to do is defeat it, and with your army now built up it's easy! You can even move the troops over from your other wall because no attack will come from that direction.

As usual, a saved game for this mission has been uploaded to the downloads section and is available here.